The electric vehicle truck niche is posed to explode with interest over the next 12 to 24 months as electric vehicle manufacturer Rivian launching their Rivian R1T electric truck later this year and Elon Musk’s unveiling of the post-acopcalyptic looking Tesla Cybertruck earlier in the year.

Rivian has been positioning its R1T as a adventure and off-roading electric vehicle since its early prototype days. The Rivian R1T has had a presence at Overland West and other autoshows since its public debut at the 2018 Los Angeles Auto Show.

Rivian has been teasing an overlanding version, or as its marketing department has defined the R1t, the “Electric Adventure Vehicle.” Rivian has been outfitting prototypes of the electric truck with a slide-out camping kitchen that fits in the Rivian expansive gear-storage compartment directly behind the truck cab as well as a demoing a truck bed Tepui tent.

The biggest concern that most overlanders have is the limited range and distance of electric trucks. If your batteries run down deep in the Sierra Nevadas or off the grid in Baja, its a little difficult to run an extension cord long enough back to civilization.

However, the Rivian R1T is boasting a 400 mile range on a fully charged battery as well as a quick-charge time of just thirty minutes. If both specs hold true, the Rivian R1T could become an overlanding favorite for those looking to transition to an electric overlanding vehicle.

Rivian sent out a teaser email this morning, featuring a trailer for the September 18th 2020 release on Apple TV+ of “Long Way Up.” The movie documents the travels of two Rivian R1Ts from the southern most tip of South American thru South and Central America to Los Angeles, covering 13,000 miles. The documentary features Ewan McGregor and close friend Charley Boorman as they do an all-electric overlanding trek.

See the trailer for “Long Way Up” on the Rivian website. 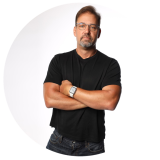 We participate in the Amazon affiliate program. Any links to Amazon are most likely affiliate links.

This website uses cookies to improve your experience while you navigate through the website. Out of these cookies, the cookies that are categorized as necessary are stored on your browser as they are essential for the working of basic functionalities of the website. We also use third-party cookies that help us analyze and understand how you use this website. These cookies will be stored in your browser only with your consent. You also have the option to opt-out of these cookies. But opting out of some of these cookies may have an effect on your browsing experience.
Necessary Always Enabled
Necessary cookies are absolutely essential for the website to function properly. This category only includes cookies that ensures basic functionalities and security features of the website. These cookies do not store any personal information.
Non-necessary
Any cookies that may not be particularly necessary for the website to function and is used specifically to collect user personal data via analytics, ads, other embedded contents are termed as non-necessary cookies. It is mandatory to procure user consent prior to running these cookies on your website.
SAVE & ACCEPT